The Darling Downs Radio Club was formed in 1974 and incorporated in 1992.
For 40 years it has provided an avenue for connecting Radio Amateurs and others interested in Amateur Radio and allied electronics on the Darling Downs, via meetings, nets, repeaters, newsletters and other projects.
Occasional projects have included: Special Event callsign stations (VI4COF), participation in the Hobby and Craft Show, classes, contesting as a club (Remembrance Day and John Moyle), Garden City Award and more.

This video was taken at the site of the old DDRC repeater building. The cream besser block building was built by members of the DDRC back in the 1970’s but the building has been put to good use since the repeater was relocated. 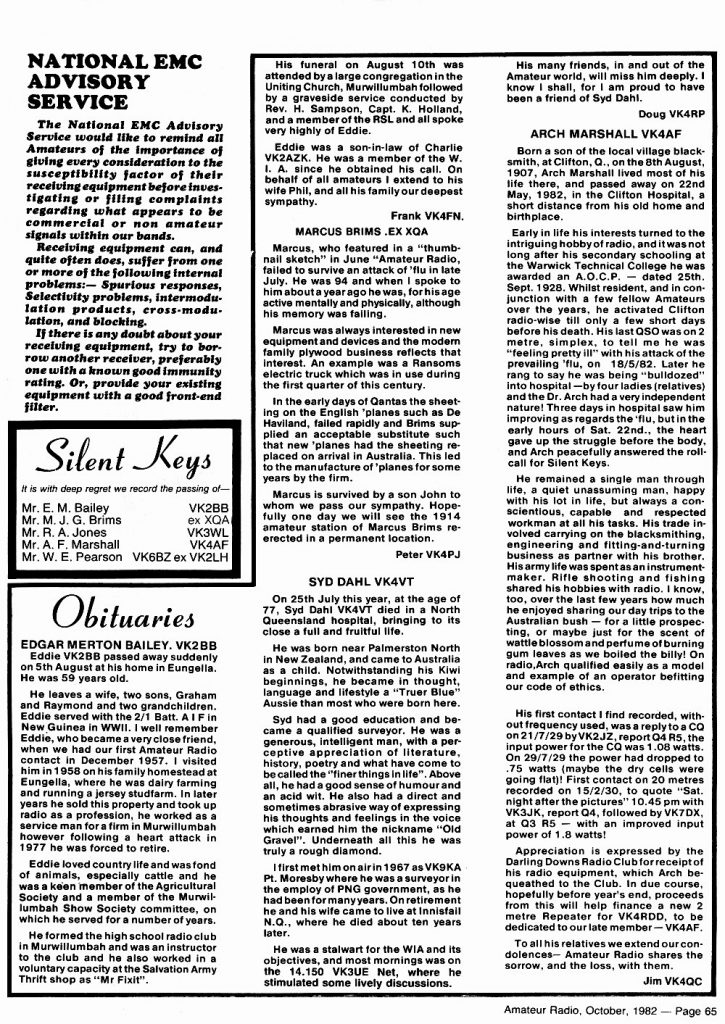 From the newsletter editorial by Ben ter Hoeven August 1980
“For this issue, the first Newsletter of the Club, it seemed appropriate to reflect a little on the Club’s history.”

Club History and Projects.
The inaugural meeting of the Darling Downs Radio Club was held on the 22 February, 1974.
Fourteen members were present and under the Chairmanship of Tom Norris the Constitution and Standing Orders were considered and adopted. Office Bearers were elected, President Tom Norris; Vice-President: Rod Webb; Secretary: Frank Adamson; Treasurer: Bob Morton – and the Club was on it’s way. By the end of 1974, membership had increased to 26 members: SWL’s : 7; AOCP’s :13; AOLCP’s : 6.

As early as 31 January, 1975, a committee was elected to examine the technical and financial possibility of the Club establishing a repeater station in the 2 metre Band. Within the next few months, a Repeater Committee was formed and a separate fund was established. Tom Norris was elected Station Manager, and Rod Webb (later, Bob Morton) was elected VHF Net Organiser. Currently the Repeater is in the workshop, undergoing an overhaul, and will be relocated at the Bunya Mountains. The 2 Metre Repeater Committee consists of Paul Ament, John Brimblecombe, Ian Barnett, and Rob Bell.
At the meeting of 25 February, 1976, the club decided to investigate the possibility of obtaining a FM stereo broadcasting licence. The project progressed until advice was received on the 27 January, 1978, that the Minister was unable to grant an experimental licence. The project was abandoned and taken over by the Darling Downs Broadcasting Society.

On the 25 May, 1979, it was proposed that an 80 Metre Net be operated by the Club using the operators call sign. Subsequently, rules for conducting the CIub Nets were formulated and adopted. During the meeting 29 June, 1979, it was decided to call the 80 Metre Net the “Darling Downs Net “, on a frequency at 3.587 ± QRM. Leslie Potter was elected Net Controller. (To be held on Saturdays at 7.30pm)

The most recent project, this Newsletter, took a rather long time to get off the ground. During the meeting 24 February, 1978, Jim Biddle moved successfully that the committee look into the possibility of publishing a newsheet. Well, Jim good ideas do go astray sometimes!